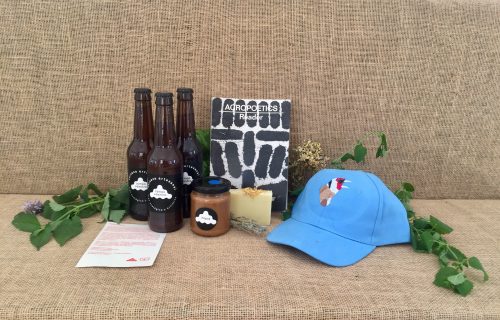 Thank you very much for supporting campo adentro’s work which is manifested among other things in our products, each one of them made with love and with a story behind that we share here :

The craft beer of campo adentro is based on a formula developed by the artist Suraia Abud during her stay at the Centro de Acercamiento a lo Rural and in collaboration with the Bailandera de Bustarviejo cooperative during the autumn of 2019.

Once again during winter and spring, Campo Adentro and the Apisquillos, have grazed a flock of 300 sheep of the endangered native breed Rubia del Molar, in the Casa de Campo in Madrid. After the lambing, we elaborated in our headquarters in Madrid, the center for the approach to the rural, this rich and sweet dulce de leche with the milk derived from milking these sheep mixed with a secret recipe and some cardamom.

The Agropoetics Reader is a collection of texts that founded and nurtured the exhibition and research project Soil Is an Inscribed Body: On Sovereignty and Agropoetics at SAVVY Contemporary last year in which we collaborated, examining the anti-colonial struggles of past and current land conflicts around the world.

This spring we could hear the birds again. We have made this print run of embroidered hats in their homage with the wish that they would not be silenced again by the roar of engines and the human humming, and thus have goldfinches, greenfinches and linnets in mind.

During our stay in the summer pastures of the Sierra de Guadarrama (El Boalo, Cerceda and Mataelpino) while teaching there at the School of Shepherds, which had more than 100 registrations, we have been collecting wild lavender and marjoram flowers for you to put in your closets.